Since 2013, Theater o.N. in Berlin has organized FRATZ International, a festival, symposium and children's daycare-encounter program for the very youngest spectators. The focus is on the performing arts, with a special emphasis on exploring and presenting experimental and hybrid forms that lie somewhere between theatre, dance, music and visual arts.

For the first time in 2017 within the framework of the festival, a selection of works for the very young from Berlin's performing arts scene was presented in the Berlin Showcase, along with 6 trans-regional and international productions.

FRATZ 2017 had a focus on Musical Theater for the very young. 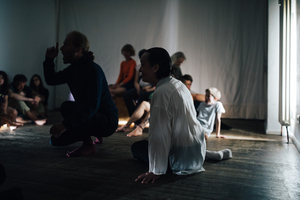 Performance for the ears for adults as well as babies and children aged 6 months and up | »Affinity« means appeal, and that's the subject in the staging: In an open space, the audience builds little islands. The performers fill...more 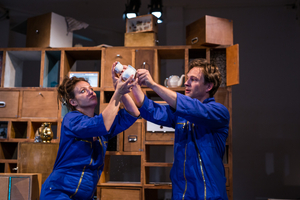 A silent play with objects and stories | It all begins with a mess. Drawers overflowing with paper, towering stacks of boxes – things seem to have been carelessly abandoned. A special kind of task force has an assignment to make...more

An experimental media performance for people aged 2 and up  | holtschulte/loos/schmitz/vogel (Germany) A white wall. A young man in front of it. Someone is sitting beside him, holding a musical instrument....more 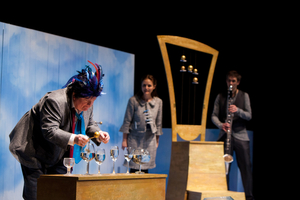 Musical theater for everyone ages 2 and up | A commissioned work by the Deutsche Oper Berlin and Theater o.N. Em and Eff are doing well. They have everything prepared for a lovely day. Then Pe the bird comes along and gets...more 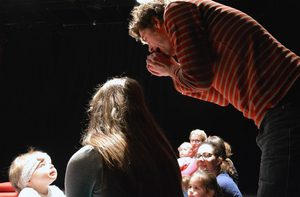 A performance of hearing and playing for 6 months and up | Benoît Sicat (France) He welcomes the audience. Then, as everybody is settled in, he waits, listens and assimilates the surrounding sounds. This time is not watched,...more

The Story of a Long Day 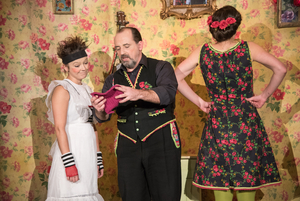 Theater for adults and children with dance, music and magic for ages 3 and up | AGORA Theater (Belgium) In a beautiful world, where everything is perfectly organized, Avi and Iva are solely responsible for making sure that...more 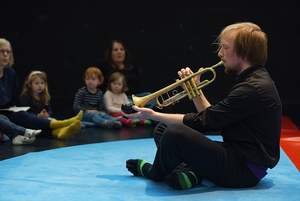 Musical theater for ages 3 and up | Staatstheater Mainz and Ensemble LebiDerya (Germany) In the beginning, there's one circle and two friends. One of them plays the trumpet, the other plays the tombak. One of them uses lips...more 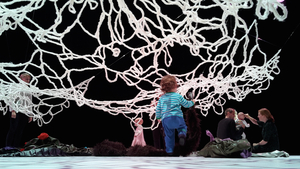 Dance performance and multisensory experiment for babies of 3 to 18 months and their parents | Dalija Acin Thelander (Sweden/Serbia) Enveloped in a tenderly and carefully arranged world full of sensory impressions and sounds...more 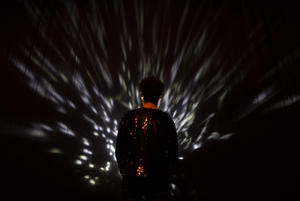 A step together into dark blue. A performance about darkness for children from 2 to 5 years old  | Alfredo Zinola and Maxwell McCarthy (Germany) When looking at the night sky, with no light except for the stars, the...more 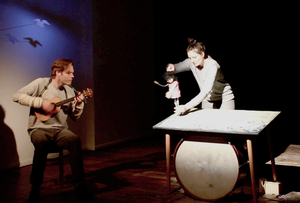 Theater with puppet and music for ages 2 and up | zirkusmaria (Germany) A small girl encounters different phenomena – the sea, her shadow and her mirror image – and enters into a dialogue with them. She becomes involved with...more

A Bit of Luck 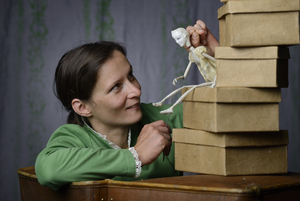 Storytelling theater with objects and a puppet for ages 3 and up | Nicole Gospodarek (Germany) At last it's her birthday – but now look what happened! Enraged, Luise leaves her birthday party and escapes to the...more 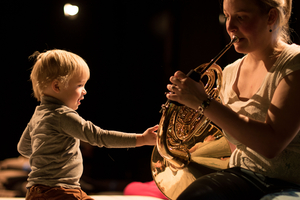 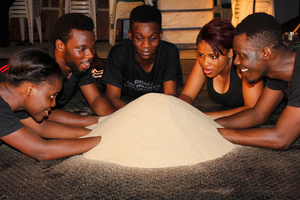 -- The shows of Sandscape are cancelled due to the rejection of visas for the artists from Nigeria. We are very sad about this and hope for your understanding!  -- Statement by the Festival Direction in German: Ich sagte...more

A lecture by Professor Wilfried Gruhn at the start of the symposium formed a common basis for the exchanges and discussions to follow. His contribution was titled “How children hear and experience music – Fundamentals in developmental psychology and implications for musical integration”.

Two Research Laboratories, each consisting of three artists from the disciplines of composition, music and play explored in two phases of three days each and develop short musical scenes for very young children. The Sound Lab
examined the same subject with respect to children's participation in the artistic process, whereby adult artists and children research together on the possibilities for cooperation in musical theater.

The festival and symposium are embedded in the FRATZ Encounters, a workshop program lasting several months with twelve kindergarten groups in six Berlin districts.

The perfomances were presented at Theater o.N., Tischlerei – the experimental stage of the Deutsche Oper Berlin, Schaubude Berlin and more venues in Lichtenberg, Marzahn-Hellersdorf, Neukölln and Wedding.